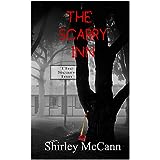 Get your copy here

Convinced they are the victims of a sick, practical joke, Heidi and her three friends are resigned to spending the night at The Scarry Inn, even though the atmosphere is anything but welcoming. Surely the owners, Dick and Thelma Scarry, are simply trying to drum up business for their new motel by terrifying the guests.

THE COFFIN / The Scarry Inn 2

When Clare, Lise, and Kelly arrive at The Scarry Inn just before a major storm, they’re thrilled to learn they’ll be staying in the room known as The Coffin, which is adorned with coffin beds and other macabre decorations.

Little do they know that one of them will end up in a coffin for real—because a tornado isn’t the only thing threatening the inn’s grand opening. A killer is determined to make sure the inn doesn’t open at all. And that person will stop at nothing to achieve that end.

Get your copy here!